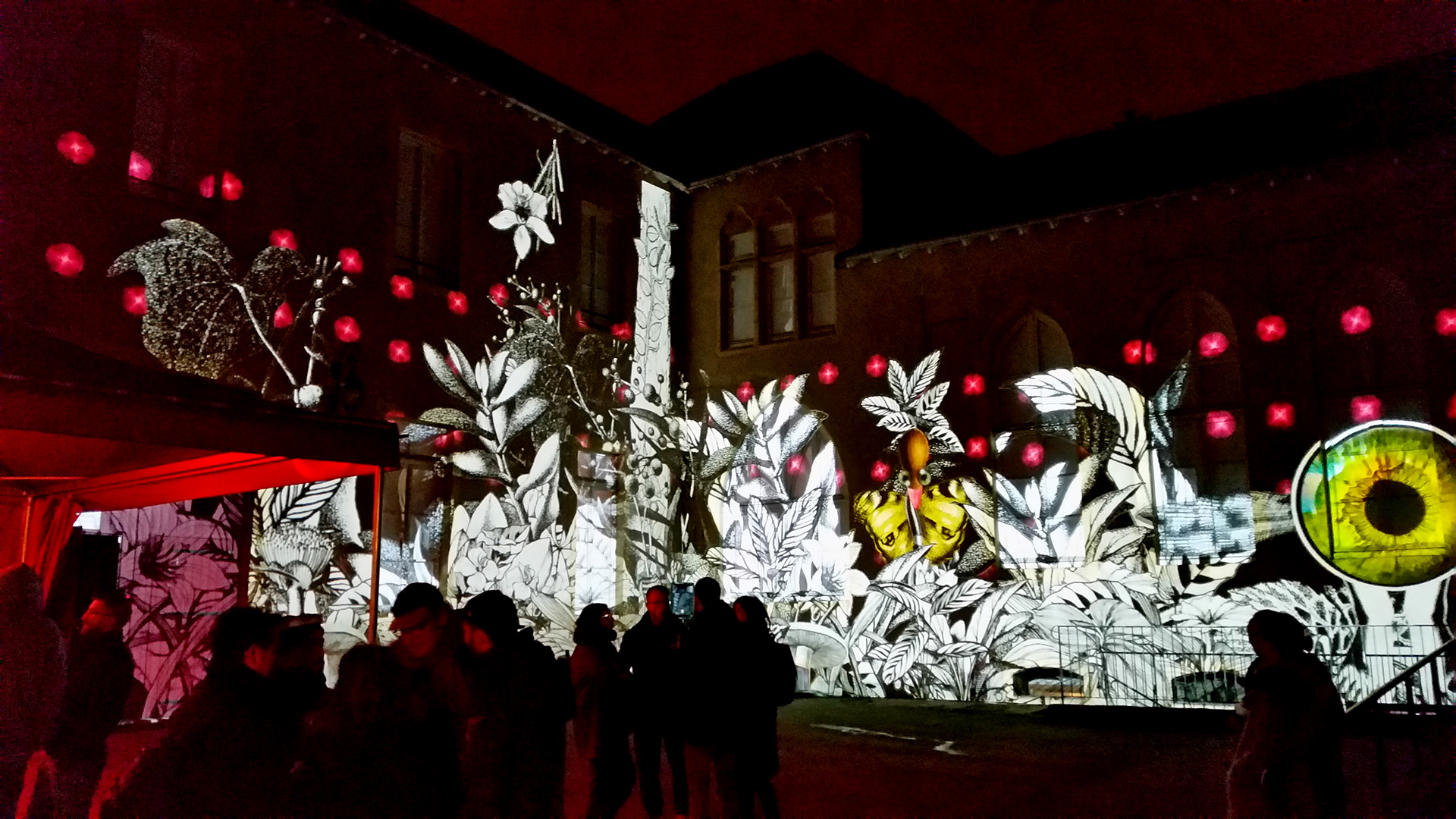 Together with the live video artist A-LI-CE I was invited to create a video mapping for the music festival MUSIQUES VOLANTES 22 in Metz (France).
In the courtyard of the urban festival building, we let sprawl a wild and mysterious forest, while its inhabitants of hybrid creatures being suspiciously eyed by dark silhouettes behind the windows until an unstoppable storm is brewing inside the building.

The video mapping consists of two parts – an unobtrusive but playfully eerie video installation and a 15-minute live act once per evening.

For the visual part, A-LI-CE worked mainly with handmade drawings and paper collages, which she digitized, animated and added effects in the post-production. I tried to keep this analog feeling and the workflow in the music as well.
While the sound for the video installation is limited to atmos of a fabulous and eerie forest, the music of the live act reminds of film scores for science fiction and horror movies of the late 50s and 60s with a sound design that uses typical clichés of film noir. Starting with vintage and orchestra, the music becomes more and more electronic during the show until it finally breaks up into (ar)rythmical samples and fades away with a loud bang in the showdown.

Further thanks to Lisa Studer, Zeze Mago and the entire team of Musiques Volantes as well as Tina Ayvaski, Christian Möltner and Joachim Reck from the Berlin-based technology company EIDOTECH for their great support in the technical planning!

The music is based on BERNARD HERRMANN’s score for the first episode “Where is everybody” of the series THE TWILIGHT ZONE. At this point I would like to advertise the homepage Film Score Rundowns, where I found the notes and would like to say a big thank you – in an unknown way – to its creator Bill Wrobel for his meticulous research work in old film scores.

To be able to change the mood of the performance very quickly, I composed the music in the scale of Olivier Messiaen’s 2nd mode. Here are two JPGs with a table of the used chords and its connections. Maybe somebody of you can use it for another project … it was too much work to let it get mouldy in my drawer.

Video report of the whole festival:

PREV NEXT
Cookie-Zustimmung verwalten
Privacy in the internet is important to me! I do not collect any data, but YouTube, Vimeo and other embedded third party providers might do.
Manage options Manage services Manage vendors Read more about these purposes
Show settings
{title} {title} {title}