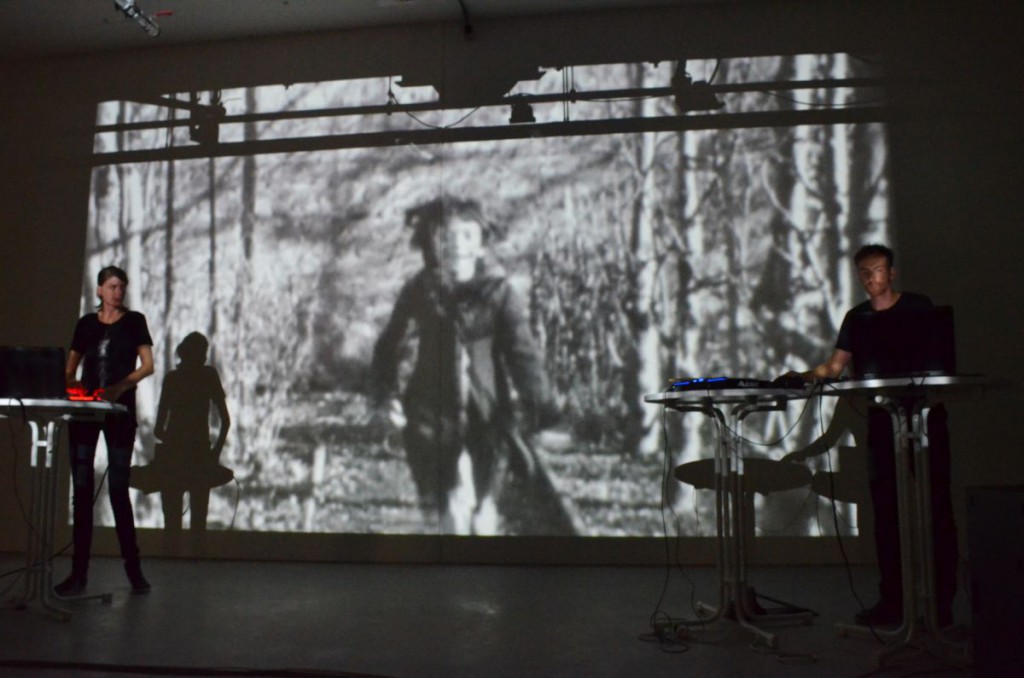 Thanks to Michael Wüst for this text about our show at the art space whiteBox in the frame of the exhibition “Everything is a remix”, curated by Benjamin Jantzen.

“Intruders” – a video visitation of the collective consciousness in the whitebox

On 13 and 14 July, A-li-ce & Swub presented the 35-minute performance “Intruders” […], which consists of more than 2000 samples, as part of the exhibition “Everything is Remix”. It is based on 4000 films which were made available by the French National Archive Centre CICLIC.

The films are mostly from small French towns in rural areas from the 1920s to 50s, some probably later. It begins in the historical trench of these years between the two world wars with a scene from a tea dance. A ghostly and reminiscent ballroom of “Selected Memories From The Haunted Ballroom” by James Leyland Kirby, who called himself “The Caretaker” in his electronic works. We perceive the images and sounds of this dancing society as something like the ghostly documentation of a repression of the future, which started in that former moment.

The document is charged with this anticipatory repression of the future. Therefore, the performance clearly announces in the exposition where the vanishing point of its development will lie, knowing that it will not reach it though, because it will remain hidden in the documentary unconscious. Seemingly friendly and with attention to detail, the private cameras sweep across landscape, trees, mud, road, absorbed everyday life. The sound, originally based on the rattle of Super 8 projectors, slowly starts to draw streaks, liquefies and slides down. Violin sounds become drowning sirens. The historic trench is filled with water.

People do their daily routines, stuff their pipes, smoke, lead a horse across the street, eat fruit, laugh. An old Renault drives through a tunnel on its way to Tarkovsky’s Solaris. Snowball fights of children lead to mass marches, first girls in red costumes, then protests, then military.

Children, the abused of history, come towards the camera, intruders of our collective memory. A girl in a red duffle coat on a tricycle. Inside us sounds “Its All Forgotten Now”, the ballroom melody from Stanley Kubrick’s “Shining”.